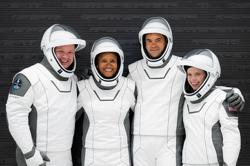 The SpaceX Falcon 9 rocket and Crew Dragon seen on the launch pad, which was used for the first completely private mission to fly into orbit, sending four private citizens on a three-day mission. — AFP

SpaceX’s all-civilian Inspiration4 crew spent their first day in orbit conducting scientific research and talking to children at a paediatric cancer hospital, after blasting off on their pioneering mission from Cape Canaveral the night before.

St Jude tweeted its patients got to speak with the four American space tourists, “asking the questions we all want to know like ‘are there cows on the Moon?’”

Billionaire Jared Isaacman, who chartered the flight, is trying to raise US$200mil (RM834.9mil) for the research facility.

Inspiration4 is the first orbital spaceflight with only private citizens aboard.

Earlier, Elon Musk’s company tweeted that the four were “healthy” and “happy”, had completed their first round of scientific research, and enjoyed a couple of meals.

Musk himself tweeted that he had personally spoken with the crew and “all is well”.

By now, they should have also been able to gaze out from the Dragon ship’s cupola – the largest space window ever built, which has been fitted onto the vessel for the first time in place of its usual docking mechanism.

Most humans in space

The Inspiration4 mission also brings the total number of humans currently in space to 14 – a new record. In 2009, there were 13 people on the International Space Station (ISS).

There are currently seven people aboard the ISS, including two Russian cosmonauts, and three Chinese astronauts on spaceship Shenzhou-12, which is bound home after its crew spent 90 days at the Tiangong space station.

That is deeper in space than the ISS, which orbits at 420 kilometers (260 miles), and the furthest any humans have ventured since a 2009 maintenance mission for the Hubble telescope.

Their ship is moving at about 17,500mph (28,000kmph) and each day they will experience about 15 sunrises and sunsets.

Their high speed means they are experiencing time slightly slower than people on the surface, because of a phenomenon called “relative velocity time dilation”.

Apart from fundraising for charity, the mission aims to study the biological effects of deep space on the astronauts’ bodies.

“Missions like Inspiration4 help advance spaceflight to enable ultimately anyone to go to orbit & beyond,” added Musk in a tweet.

The space adventure bookends a summer marked by the battle of the billionaires Richard Branson and Jeff Bezos to reach the final frontier.

But these flights only offered a few minutes of weightlessness – rather than the three full days of orbit the Inspiration4 crew will experience, before splashing down off the coast of Florida on Saturday. – AFP 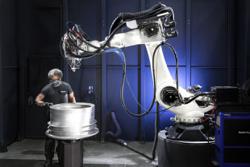