Starting in the first lane, Syaiful finished seventh out of eight swimmers in the event at the Tokyo Aquatics Centre yesterday.

Italian Francesco Bocciardo put up a great performance to grab the gold with a time of 1:09.56 and China’s Wang Lichao took the silver with 1:10.45.

Daniel de Faria Dias of Brazil failed to defend the gold he won in Rio 2016 and settled for bronze with 1:10.80.

Earlier, Syaiful had advanced to the final after finishing third in the first of two qualifying heats and was seventh best out of 13 swimmers overall.

Only the best eight swimmers from the two heats held in the morning advanced to the final.

On Wednesday, Syaiful, who suffered deformity in both legs after being involved in an accident in 2012, did not qualify for the final of the S5 men’s 200m freestyle event after his participation in the first qualifying heat was cancelled due to a technical error.

The 26-year-old still has a chance to win medals as he is scheduled to compete in the men’s 50m freestyle (S5) and 100m breaststroke (SB4) events. — Bernama 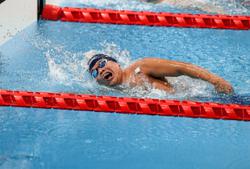