Aifa ready to take over as C’wealth Games flag bearer

PETALING JAYA: Aifa Azman was the youngest winner of the Professional Squash Association (PSA) Tour in 2018 when she was just 16.

And that achievement was good enough a reason for the Olympic Council of Malaysia to name Aifa as the contingent’s new flag bearer for the Commonwealth Games in Birmingham from July 28-Aug 8, alongside national para-athlete and powerlifter Bonnie Bunyau Gustin.

The 20-year-old Aifa replaces fellow Kedahan S. Sivasangari, who suffered injuries to her head and spine following a car crash in the early hours of Sunday at the Maju Expressway.

Aifa was surprised with the call-up but was grateful.

“It’s an honour indeed to carry the Jalur Gemilang. This is my first time. I would like to thank the selection committee for choosing me,” she said.

Aifa made her Commonwealth Games debut in Gold Coast 2018, where she participated in the singles and mixed doubles events. The world No. 28 is slowly growing as one of the top players in Malaysia, and marked her strong presence by winning the national title last year.

Her first pro title was achieved when she won the Malaysian Tour Squash Circuit No. 2.

For the Games in Birmingham, Squash Racquets Association of Malaysia (SRAM) have made a reshuffle and will now team up Aifa with Rachel Arnold in the women’s doubles instead of the mixed doubles with Mohd Syafiq Kamal.

Aifa remains in the singles competition.

Chan Yiwen will now be the third singles player for Malaysia, besides Aifa and Rachel.

The other women’s doubles pair would be Yiwen and Noor Ainaa Amani Ampandi.

Syafiq will compete in the men’s doubles with Ong Sai Hung and in the singles while Addeen Idrakie will partner Ainaa in the mixed doubles.

“At first, I was quite surprised by the decision because I’ve never played women’s doubles with Rachel before, as I’ve been practising in the mixed doubles with Syafiq Kamal for quite a long time,” said Aifa.

“There are a few more weeks left, and we are not going to waste any more time. We will try to improve our communication and hopefully do well in Birmingham.

“Pressure is everywhere, I cannot avoid it as an athlete, but Rachel and I seem to be doing good in training this week. We are comfortable with each other, so that’s a good development.” 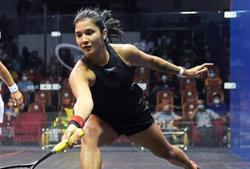