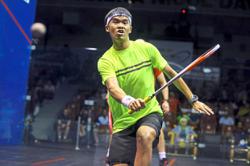 PETALING JAYA: Ng Eain Yow has been given a quick chance to avenge his recent Egyptian Open defeat to Mohamed El-Shorbagy at the US Open.

The 23-year-old Malaysian No. 1 squash player will face the world No. 2 again in the first round of the Open from Oct 2-9 at the Arlen Specter US Squash Centre in Philadelphia.

En route to the clash with El-Shorbagy, world No. 18 Eain Yow was on fire as he shocked world No. 9 Mostafa Asal of Egypt in the second round and Colombia’s world No. 11 Miguel Rodriguez in the third.

Despite his defeat in the last eight, it was Eain Yow’s best run in a top-tier Professional Squash Association (PSA) tournament.

Eain Yow and El-Shorbagy have been training together in Bristol, England, for some time and the former can’t wait to shock his training buddy in the next meet.

“Shorbagy has exposed some of the flaws in my game in Egypt. I still have a lot to work on,” admitted Eain Yow.

“I’ve spoken with my coach Adrian Stiff, and we’re working on my weaknesses, but the big thing was gaining more experience in how to deal with a big match.

“I’ll face Shorbagy in my first match in the US Open. I’ll be looking forward to getting a win over him this time.”

Eain Yow, who dreams of becoming the world No. 1 one day, is on the right track in terms of his squash growth, but he knows the work behind it will take a while.

“Yes, I’ve always been working towards being the world number one. I’m looking at breaking into the top 10 in the next year and, from there, build on getting to the number one spot.

“It’s hard to set a time frame since everyone at the top is working extremely hard to be at the very top, but I believe I will get there one day.

“Exposure to training with the best is crucial to get there, as well as having a mindset focused on improving. To never be content and constantly looking at new ways to improve.” 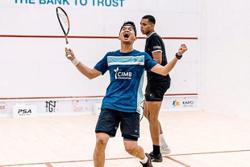