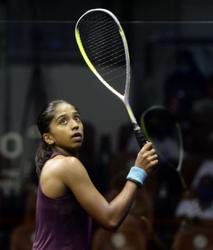 On Friday, she upstaged world No. 10 Tesni Evans of Wales to set up a meeting against second seed and world No. 2 Nouran Gohar of Egypt in today’s third round at the El Gouna International Squash in Cairo.

Due to overwhelming entries in the men and women competitions, the matches are being held on alternate days so that all could be played on the glass court.

Her win two days ago was her second against a top 10 player, having beaten world No. 8 Amanda Shoby of United States in 2019.

The 22-year-old attributes her steady progress to her training under the former world No. 1 Palmer of Australia.

“I’ve been training with David in the States and I love it there, ” said Sivasangari.

She has been training with the 44-year-old Australian since she left the country to pursue her study and and playing career at the prestigious Cornell University in Ithaca, New York, USA, in January, 2019.

“I feel that since I’ve been training there for the past two years, I’ve improved on my physical side and technical skills quite a lot, ” said the Malaysian, who was named Young Player of the Year by the Professional Squash Association (PSA) in 2018.

“It’s very different to train with David because he has a lot of experience in his career, so I always feel good training with him.

On paper, it looks difficult but the Egyptian can expect a tough run against the Malaysian.

“I have only played against Nouran one time, long ago during the world juniors and I lost 3-0, ” she said.

“Egyptian players are strong, of course. They always do whatever they want on court just to win a match. I’ve always chosen to stay focused on my own game plan rather than focusing on them, ” added the communication student.

Besides Nouran, the other seeded players who have booked places in the third round are Sobhy (4th), Joelle King of New Zealand (7th) and Salma Hany of Egypt (8th) from the lower half of the draw. 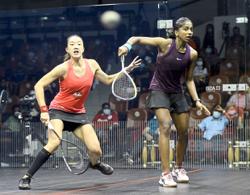