KUALA LUMPUR: Ryan Pasqual had great dreams of seeing success as a professional squash player when he turned pro at the age of 18 in 2015. But it has been all disappointment for the young man.

His career was shortlived. After just five years, his stint as a pro has come to an end.

In 2017, he suffered an ankle injury which forced him out of tournaments. A slipped disc in December 2018 then handed him a harder blow.

Although he came back two months later, he could not make much headway.

After a fruitless 2019, Ryan was dropped from the Squash Racquets Association of Malaysia (SRAM) training programme in March, at the age of 23.

“I could not perform well because of injuries. I had an ankle injury in 2017 and a year later, I suffered a slipped disc.

“I also failed to win any PSA titles since turning professional in 2015,” said Ryan.

He featured in eight tournaments last year but failed to perform well and saw his world ranking plunge from 175 in January to 262 this month.

“I am sad to leave the national team and I have decided not to play in the PSA tournaments any more. But I will continue to play in domestic tournaments.

“I am still young and I need to compete in domestic tournaments to stay in form,” said Ryan.

The Penang lad did get an offer to coach at the academy in Bukit Jalil, which is run by former national coach and former SRAM director of coaching Allan Soyza.

But his tale of disappointments continued. He was supposed to have started immediately after his contract ended in March but the movement control order (MCO) was enforced just then.

“I am happy to get the job. I was supposed to start coaching young players at the academy at the end of March but I have yet to start the coaching job.

“I have five years of experience as a professional player. I believe that I have the ability to coach the juniors,” said Ryan. 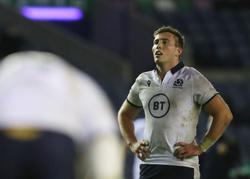 It’s a no-go for four
Low on a high after last-minute approval
Rachel pumped up to play in big tournament
Glorious time as Nicol named among Laureus greats
Legend Nicol credits her mother for setting good example
Wee Wern waits anxiously for govt travel permit to Egypt
SportExcel the launching pad to stardom for Nicol
Wee Wern looks forward to better results on court after ICL surgery
Watch your back, Ivan
Kedahan happy to welcome Ramadan with pro title