(Reuters) - Ireland coach Andy Farrell has made changes ahead of their final Six Nations match against England in Dublin on Saturday, with experienced scrumhalf Conor Murray back in the starting lineup alongside captain Johnny Sexton.

Murray, who was on the bench last weekend for Ireland's win over Scotland, has fully recovered from a hamstring injury and replaces Jamison Gibson-Park who was named among the replacements.

"Conor has another week behind him training-wise, so he's fresh and fit and raring to go. He's a big-game player," Farrell told reporters on Thursday.

Bundee Aki comes in at inside centre with Garry Ringrose injured and Robbie Henshaw is at outside centre.

Jacob Stockdale is back on the left wing, his first appearance since the Autumn Nations Cup in December, replacing James Lowe who did not make the 23-man squad after his performance against Scotland was marred by defensive errors.

"With James there's a few things that we've talked about over the series, over the Six Nations," Farrell added.

"He's very young as far as international experience is concerned, he's learned a lot in his time. We're looking forward to him progressing in the big games back at Leinster in the coming weeks."

Dave Kilcoyne comes in for Cian Healy at loosehead prop and lines up alongside Rob Herring and Tadhg Furlong in the front row.

Josh van der Flier starts at openside flanker after Will Connors was ruled out when he suffered a knee injury in training and CJ Stander will play his final game for Ireland at blindside flanker.

"Will was unbelievably unfortunate," Farrell said. "He's had a great tournament and really progressed. It was something out of nothing... he came down in an awkward position on his knee. He'll have some more checks in the coming days."

Ireland are second in the table on 11 points and cannot overhaul leaders Wales (19). Holders England are fourth on 10.

(Reporting by Rohith Nair in Bengaluru; Editing by Ken Ferris and Ed Osmond) 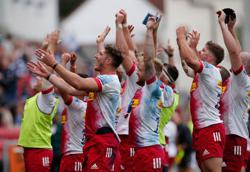