Delicious: One of the meals cooked by Lawrence Petrus during the lockdown in Perth.

KUALA LUMPUR: Since arriving in Perth, Lawrence Petrus has been known more for serving delectable meals than for his touchdowns in rugby.

The 25-year-old Kadazan forward arrived on March 15 to make his debut for University of Western Australia in the Western Australian League in Perth in June but he is doing more cooking than training – due to the Covid-19 pandemic.

The league was supposed to begin on March 28 but was postponed to May 2 and now to June because of the worsening outbreak. No dates have been fixed yet.

Lawrence, who played for Malaysia in the Asia Rugby Premier Division in 2018 and 2019, said he has been doing light training since he arrived in Perth.

“But it does not matter as I spend my free time cooking food for my university mates, ” said Lawrence.

“I’ve also cooked for a few of my teammates and they were impressed that I can dish out Western and Asian cuisines.

“I’m now popular among my teammates for my cooking.”

“I learnt cooking at the age of 11 from my cousin Jackson Anthony, a chef who worked in a few countries, ” said Lawrence.

“My teammates say that I should be a chef when I retire from playing rugby.

“But I am more interested in being an environmental officer as I love the environment, ” said Lawrence.

Lawrence said he doesn’t mind waiting until June to feature in his first match in the league.

“I am here to gain all the experience I can get in playing in the Australian League, ” said Lawrence, who took up rugby at the age of 16.

In 2013, he played for Bintulu rugby club before joining Sabah Osca Warriors a year later.

Lawrence has a degree in environmental science and technology from Universiti Putra Malaysia (UPM) and he played for UPM Serdang Angels in domestic competitions from 2015 until last year.

He helped Terengganu become champions for the first time in the Agong’s Cup when they beat five-time champions Sabah 26-24 in the final last year. 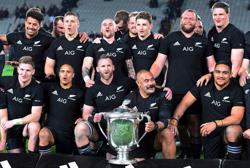