Lawrence has to wait Down Under

But he has been forced to wait longer. The league, scheduled to begin on March 28, has been postponed indefinitely.

The 25-year-old Tawau-born was roped by University Western Australia team to play in the league in February because of his experience playing for Malaysia in the Premier Asia Rugby Championship in 2018 and last year.

The Kadazan player, who arrived in Perth on March 15, said he was informed the following day that league had been postponed due to fear of the virus.

“I have been told the league will only begin on May 2 and is expected to end in November. Although the league has been postponed, I am still in high spirits to play for the first time in the Australian League, ” said Lawrence.

“I will get more time to train with the players in preparation for the league in May. Although the league is postponed, we still train in small groups to avoid being affected by the virus.

“I was told the players from England and South Africa will also play for the University of Western Australia in the league.

“I feel proud to be the first Sabahan to play in the league as we are expected to play about 18 matches, ” said burly player, who weighs 120kg and is 178cm in height.

“With me featuring in Australian League, it will encourage more youngsters from my home state and Malaysia to follow in my footsteps to play Down Under, ” said Lawrence, who took up rugby at the age of 16.

In 2013, he played for Bintulu rugby club before joining Sabah Osca Warrior a year later.

Lawrence, who has a degree in environmental science and technology from Universiti Putra Malaysia (UPM), played for UPM Serdang Angles in domestic competitions from 2015 until last year.

He also played for Sabah in the Agong’s Cup in 2015. But he played for Terengganu from 2017 to last year, helping them emerged champions for the first time by defeating five time champions Sabah 26-24 in the final at Serdang last year. 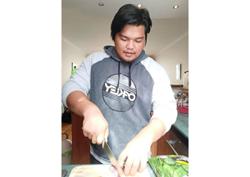