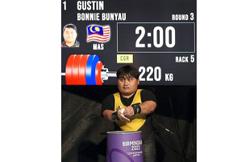 The 23-year-old, who is from Sarawak, thus became the first Malaysian para athlete to take gold in Commonwealth Games history.

Bonnie broke the Games record with his first lift of 210kg at the National Exhibition Centre.

Bonnie, the reigning Paralympic champion and world record holder at 230kg, was successful with his two subsequent tries at 216kg and 220kg respectively.

Bonnie was declared the winner to shouts of joy from the Malaysian supporters at the venue, setting a new Games record of 154.6 points.

England's Mark Swan put some pressure on the Malaysian but had to concede defeat.

The host nation's representative produced his best effort of 202kg to take silver with 145.5 points ahead of Nigeria's Innocent Nnamdi, who had the bronze with 132.5 points.

Medals won in para sports count in a nation's medal tally at the Commonwealth Games.

This is the first time Bonnie made the Commonwealth Games podium. He made his debut in the previous edition in Gold Coast, Australia in 2018 by placing fourth in the men's lightweight category.

Bonnie already chalked a first for the para athletes community last weekend when he had the honour of carrying the Malaysian flag in the opening ceremony marchpast alongside woman squash player Aifa Azman. 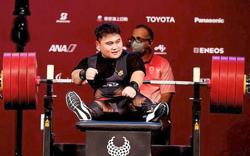