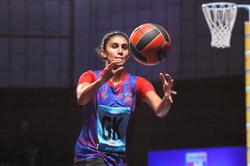 PETALING JAYA: The feeling was indescribable.

It was sweet revenge as they had lost to KL Wildcats 47-58 in last year’s final. This year, they were strengthened by the presence of two imports - Thailand’s Sirima Samnaree and Gayani Dissanayake of Sri Lanka.

Mei Foong said the title meant a lot as the team came through lots of hardships.

“I can’t explain the feeling right now. There was no secret to our success.

‘‘We’re just so grateful with this win as we have come through difficult times,” said the 29-year-old Mei Foong.

“The presence of Che Puan Khaleeda Bustamam (wife of the Regent of Johor and also patron to the Johor Netball Association) fanned the fire in every player to win the title this year. The team work was awesome. “Before the NSL, we struggled to gather a decent team. It was challenging during training. Even for me, it has been a season filled with troubles.

‘‘I’ve had so many injuries but I plodded on.

“It makes this win even sweeter. We will savour this victory before making our plans for the future,” she added.

Some of the players are expected to be called up to represent Malaysia in the Asian Championship in Singapore from Sept 4-11.