Agile: Afifuddin Razali (right) in action against Vietnam in the inter-regu event. — Bernama

MALAYSIA were forced to accept the reality that Thailand are way beyond their reach in sepak takraw after settling for silver again in the inter-regu final.

After losing the first game, Malaysia replaced killer Afifuddin with Mohd Noraizat Nordin but it did little to ruffle the Thais who had an easier 21-13 win.

Thailand had also countered Malaysia’s tactics by changing their original server (tekong) Siriwat Sakha with Sittipong and it made them look deadlier.

Earlier, Malaysia were also blanked 2-0 in the team final.

National coach Abdul Talib Ahmad conceded that Thailand were just too good and his regu could do little to contain them.

“Our players did their best and tried to break the Thais but the opponents were good. We could match them initially but our finishing towards the end of the games wasn’t effective. Thailand took advantage of that,” said Talib. 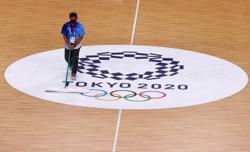