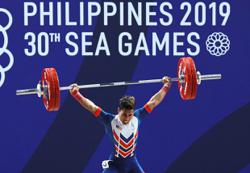 All smiles: Aniq Kasdan (left) posing for a photograph after winning the silver medal in the men’s below 55kg clean and jerk category of the World Weightlifting Championships in Tashkent, Uzbekistan. Together with him is his coach Naharudin Mahayudin.

PETALING JAYA: Malaysia have discovered a new young talent just in time to prospect for gold at the Birmingham Commonwealth Games next year.

Nineteen-year-old Aniq Kasdan became the first Malaysian to win a medal at the World Weightlifting Championships in Tashkent, Uzbekistan, on Tuesday.

Aniq heaved 142kg to secure the silver medal in the men’s below 55kg clean and jerk category.

Bulgarian Angel Rusev took the gold on 144kg while Kazakhstan’s Arli Chontey settled for bronze despite also lifting 142kg as he had attempted it after Aniq.

Chontey, who managed 118kg for the snatch, took the overall gold in the class with a combined 260kg. Thailand’s Thada Somboonuan came in second with 256kg while Rusev was third with 254kg.

Aniq, who lifted 107kg in the snatch, came in fifth on a combined 249kg, and his effort thus wiped off the national record of 248kg held by 2018 Gold Coast Commonwealth Games gold medallist Azroy Hazalwafie Izhar Ahmad.

Azroy has been implicated in a doping issue and will not be defending his Commonwealth Games title.

Aniq, as the highest-ranked Commonwealth lifter in the overall standings, thus secured the Commonwealth Championships below 55kg class title.

Aniq’s success is a timely lift to the efforts of the Malaysian Weightlifting Federation (MWF) after being saddled with doping issues in recent years.The most recent positive case involving a female lifter happened during the National Championships in Pahang in October.

MWF president Datuk Ayub Rahmat said: “This is Malaysia’s best ever performance in the history of the World Championships.”

Aznil Bidin (below 61kg) and Erry Hidayat (below 73kg) are also competing in Tashkent. 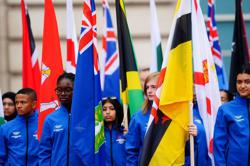