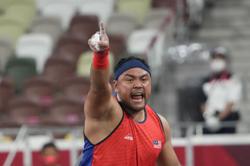 Megat said he apologised on behalf of all Malaysians during a meeting with his Ukraine counterpart Olena Zaitseva, who is also the Ukraine Paralympic Council secretary general yesterday.

He also explained to her that the negative reaction stemmed from the frustration over the decision which went against Mohd Ziyad Zolkepli, more so since it happened on Malaysia’s 64th National Day on Aug 31.

“I admit that I was also upset when I got the result that Ziyad’s participation had been cancelled due to a technical error.

“I believe this incident has not only taught me but also all sports enthusiasts that time is gold.

“And time can also cause us to lose the coveted gold medal.”

He hoped all parties would be able to maintain a high level of sportsmanship and professionalism.

He added that the incident should serve as a lesson so that it would not be repeated.

A protest was lodged by Ukraine after Ziyad was late to enter the call room which resulted in the Malaysian not being able to defend the gold he won at the 2016 Rio edition. despite setting a world record of 17.94m.

His classification as “Did Not Start” (DNS) also resulted in the record not being recognised. —Bernama