Dad’s the way to do it

PETALING JAYA: It was his father’s dream but youngster Bonnie Bunyau Gustin is living it.

The 22-year-old Bonnie provided an early Merdeka Day gift when he smashed the Paralympics record en route to lifting the nation’s first gold medal in the men’s 72kg powerlifting event in Tokyo yesterday to make it a memorable year.

Just two months ago, the 2019 world champion was also crowned as the World Cup winner.

And Bonnie has his disabled father Gustin Jenang, a former national powerlifter, to thank for.

“I’m very happy that I am able to live my father’s dream. He wanted me to win the world and Paralympics titles. I made a promise to myself to make his dream come true when I joined full time training in Kuala Lumpur (in 2018),” said Bonnie, who was born with polio.

The father and son had even competed together in the 2017 Asean Para Games in Kuala Lumpur where the father won a bronze.

“I’ve not visited my family for more than a year. I called them on the eve to get their blessings.”

“My coach never gets tired in giving me motivation even when he is stressed in training and competitions. He always pushes me to give my best.”

And it was Bonnie’s best that was reflected in his gold-medal effort yesterday.

While he was on top form, three of his main rivals – China’s Hu Peng, Rasool Mohsin of Iran and Nigerian Innocent Nhamdi – surprisingly recorded no lifts on the big stage at the Tokyo International Forum.

Bonnie was the last in the field of 10 to appear on stage and left no room for drama as he heaved 217kg on his first attempt (squat).

With no one close to matching his leading effort, Bonnie went on to lift 228kg (dead lift) to successfully break the Paralympics record held by Rasool in Rio de Janeiro in 2016 by 1kg. 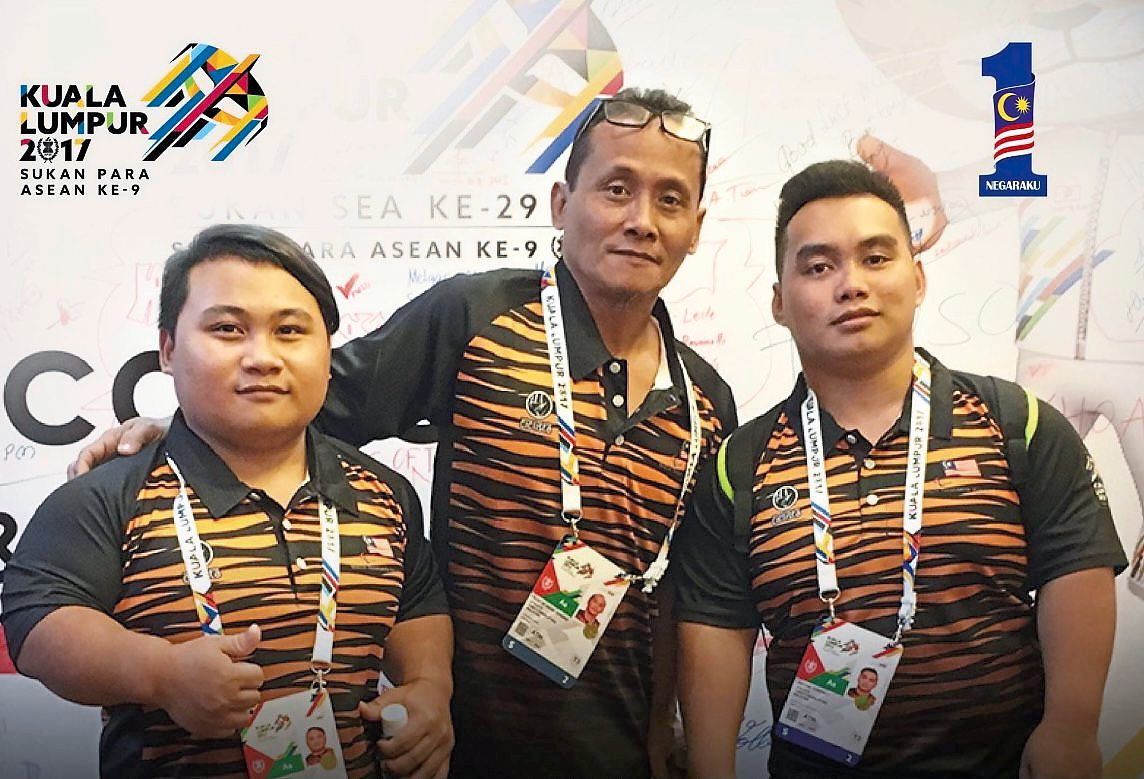 All in the family: Bonnie with father Gustin Jenang (centre) and brother Brian Junency during the Asean Para Games in Kuala Lumpur in 2017.

With gold already in the bag, Bonnie went for the bonus attempt to break his world record of 230kg set just two months ago at the Para Powerlifting World Cup in Dubai in June but missed out on 231kg.

He became the first gold medal-winner in the sport. Previously, Siow Lee Chan took bronze in the women’s 56kg category at the 2008 Beijing edition.

Bonnie, who is set to collect RM1mil under the national incentive scheme for his golden feat, said his biggest fear was to let his nerves get the better of him.

“I was worried when I saw the others fail to lift... I was nervous while I waited for my turn. After all, it was my first Olympics,” said Bonnie, who likes to listen to rock music to calm himself down before competing.

“But my coach kept telling me to relax and I did. And when I successfully lifted my first, I became more confident. I will cherish this win and look forward to 2024 Paris Paralympics.”

Malaysia have a chance to add another medal in powerlifting as the 2014 Glasgow Commonwealth Games bronze medal winner Jong Yee Khie will compete in the men’s 107kg tomorrow.