(Reuters) - Briton Sarah Lewis announced on Tuesday she was standing to become the first female president of the International Ski Federation (FIS), the body that dismissed her as secretary-general in October.

The former Alpine skier, who had been with the FIS for 20 years, published her candidacy and manifesto on a website http://www.sarah-lewis.com

"We stand out among international federations currently with an all-male Council, excepting one of the Athletes Commission representatives being female," Lewis declared in the manifesto.

"Advancing diversity proactive measures within the FIS leadership structures is vital for our future..."

The election will be held virtually on June 4, when current chief Gian-Franco Kasper is due to step down after 23 years in the job.

Lewis has been nominated by the Royal Belgian Ski Federation.

The next president will be only the fifth in the 97 year history of the federation.

Lewis said it was time "to assess the appropriateness for term limits of the FIS President and FIS Council Members with a view to introducing a limit of three election terms."

She added she would also renounce a presidential salary "to enable extra resources to be redirected into supporting other areas of the organisation." 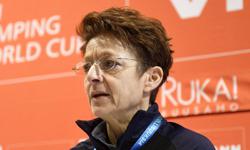