(Reuters) - Simon McGonagle has been banned for nine months, seven of them suspended, for taking the photo of Irish trainer Gordon Elliott astride a dead horse, the Irish Horseracing Regulatory Board (IHRB) said.

The sanction is set to take effect from April 19.

The IHRB said that head lad McGonagle, who was first employed by Elliott in 2007, accepted he had damaged the integrity of the sport by clicking and sharing the image.

"We will not repeat what has been said before about the awful image at the heart of this case," the IHRB said. "The taking of the image was ill-judged and in bad taste and we consider that Mr. McGonagle should have known better.

"As Head Lad he should also show a good example to others in the yard. However, we reiterate the points made in the Elliott case that this incident is not concerned with cruelty or horse welfare.

"We reach the sanction having considered all of the circumstances, aggravating and mitigating factors, bearing in mind the seriousness of the offence and the need for deterrence, and considering Mr. McGonagle's personal circumstances, in order to reach a proportionate result."

Elliott, whose horses include the Michael O'Leary-owned 2018 and 2019 Grand National winner Tiger Roll, has been banned for 12 months, six of them suspended.

He also lost his yard sponsor, while bookmaker Betfair ended their association with the trainer. 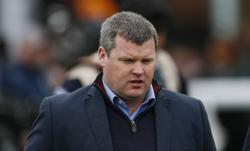