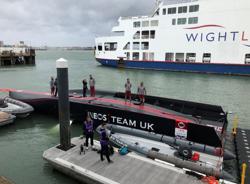 (Reuters) - After losing all of their races in the December regatta INEOS Team UK staged a remarkable turnaround on Friday to win their opening two races of the Challenger Series, which determines who meets Team New Zealand for the America's Cup.

'Britannia' claimed a dominant 80-second win over American Magic in the opening race of the day on Waitemata Harbour in Auckland before beating Italy's Luna Rossa by 28 seconds.

"That feels a lot better than six consecutive losses," said skipper Ben Ainslie. "That was a good team effort."

"Giles did a great job calling the breeze and the guys sailing the boat fast and the handling. It was a good team effort," he added.

American Magic helmsman Dean Barker said there was a long way to go.

"It's early days, it's one race, we obviously would have much preferred to have come out with a win, but at the same time, it's a long series and we've got to keep improving," he said.

Luna Rossa face American Magic in the first race on Saturday, with the U.S. team facing INEOS Team UK again in the second.

The winner of the series earns the right to face TNZ for the America's Cup, which begins on March 6.

(Reporting by Hardik Vyas in Bengaluru;Editing by Peter Rutherford)