PETALING JAYA: It was a surreal scene in Putrajaya when a group of karate practitioners submitted a memorandum to Youth and Sports Minister Datuk Seri Reezal Merican Naina Merican to step in and resolve the internal conflicts afflicting Malaysia Karate Federation (Makaf).

Dressed in white and carrying banners, the group were made up of representatives from nine state affiliates and three karate clubs that were suspended by Makaf last year for breaching the constitution rules.

The breakaway group had passed a vote of no confidence against the parent body at that time and later decided to hold an extraordinary general meeting (EGM), leading to their eventual suspension.

It all started at the Makaf elections back in 2018 where incumbent president Tan Sri Ali Rustam scraped in by five votes after receiving 57 while his challenger, Datuk Clement Soo, who is with the breakaway group, had 52 votes.

Kuala Lumpur Karate president P. Arivalagan said the actions of the executive committee were not in accordance with the Makaf constitution in the first place.

“This has gone on for three years and affected the national development of karate in the country.

“We approached the former Deputy Youth and Sports Minister Steven Sim last year and we were told to follow the Sports Development Act.

Nothing came out of it and then had two meetings with the Sports Commissioner’s office but this was still not resolved.

“Makaf have continued to maintain that they went through fair process to get elected, ” he said.

The group challenging the legality of Makaf have since gone to court earlier in the year to challenge the decision to suspend them.

“But it is a long process and it does not bode well with things hanging in the balance since the Tokyo Olympics is months away.

“Our hope is for the Sports Minister to do a round-table discussion and set up an independent committee to prepare for a new Annual General Meeting based on the 2018 Sports Development Act. Hopefully, he can help end this impasse.” 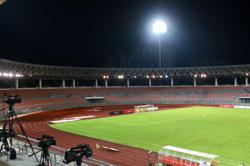