Nicknames of athletes only make their careers more colourful PETALING JAYA: Nicknames for athletes do add colour to their professional careers.

The names given by their family, teammates, schoolmates and even the media, can range from shortened versions of their names to something they are associated with and even something ridiculously funny.

Some of the top Malaysian athletes have embraced it and have even been a good sport about it.

Olympic Games bronze medallist Azizulhasni Awang says he does not only have one but plenty of nicknames.

“Back in Dungun when I was young, most of my family members and friends called me Jijoe, ” said the country’s most decorated cyclist, currently based in Melbourne.

“When I moved to Bukit Jalil Sports School, I told my new schoolmates that they can call me Azizul or Joe but they ended up calling me Jojo. Maybe to them Jojo sounds more hip and it’s the modern KL city style.

“And in Melbourne, people call me Azza! The Aussies love to shorten everything and make it sound nice in their slang. If I’m not mistaken, it was my gym coach who gave me that name. I told him my name is Azizul and straight away, he told me he would call me Azza, as it sounded more Australian.

“Oh, I’ve forgotten to mention that most of my cyclist friends from Terengganu call me Pok Jo. Pok is a slang in Terengganu referring to Pak or Bapak (a respected elder person), ” added Azizul, who is also referred to as Pocket Rocketman due to his small stature.

For badminton mixed doubles star and the 2016 Rio Olympics silver medallist Goh Liu Ying, a habit of hers had earned her the name Milky.

“It all started when I was in BJSS. I was called Milky by a senior, just because I love to drink milk! And the name has stuck since, ” said Liu Ying.

2019 SEA Games women’s singles badminton champion S. Kisona said: “Mine is quite straight forward, family and friends call me Sona but when I studied in a Chinese primary school, I was known as Ji Su Na.”

Diver Pandelela Rinong, the 2016 Rio Olympics silver medallist, said she was either called Lela or Nong.

“In the diving fraternity, my pet name is Lela. My family, though, call me Nong, which is short for Rinong and is also a name for a girl in my native language, Bidayuh, ” said Pandelela.

One of the unusual names given to bowling queen Shalin Zulkifli is black pearl, referring to her as a rare gem in the sport.

“I was given that name by an aunt in Taiwan. Others call me a living legend too but the common names used by my teammates are Lynn, Suzy, Kak Shalin, ” said the seasoned campaigner.

Eight-time world champion Nicol David said she had no nicknames except for the ones given by the media.

“They used to describe me as duracell (battery) or energiser bunny, ” said Nicol, who is known for her superb endurance on court during her playing days.

As for national No. 1 men’s artistic gymnast Jeremiah Loo, his favourite tag is Jloo.

“Teammates call me Jerry or sometimes Li as my surname in Chinese is pronounced in that way. Some prefer Miah but I like Jloo because it’s quite unique, ” he said.

There are many other athletes with unique, funky and fun names and in one way or another, these monikers do show that the world of sport is full of interesting personalities. 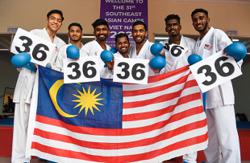 Davos-Qatar's World Cup audience projected to be 5 billion: FIFA boss
Kok Leong finds seasoned Wattana too hot to handle
No E-ventful finish for gamers as they settle for bronze
Nor Iman blocks out noises from home fans to clinch gold
Debutant Hafiz settles for bronze
Backed by former champs, exponents continue to excel
We have proven our worth, please let us in
MOA want safer and healthier environment for athletes
Rallying-Rovanpera completes winning hat-trick in Portugal
Olympics-Russian IOC members skipped Olympic session-source