Bringing back old memories: Datuk Dr Ramlan shooting with a bow and arrow at the Talent Identification Camp’s closing dinner in September 2011.

PETALING JAYA: The doyen of Malaysian sports medicine and science, Datuk Dr Ramlan Abdul Aziz, will clock out after 32 years of service today.

Dr Ramlan’s final project with the National Sports Institute (NSI) is a legacy project – a book, not about himself but on Malaysia’s Olympians.

Many would feel that Dr Ramlan would have plenty to share following his long service to sports medicine, sports science, anti-doping and sports administration but the good doctor wants the spotlight to shine on the Malaysian sports heroes.

“This coffee table book idea came about in 2011 but was delayed by my work commitments until I revived the project in May 2019, with the approval of the NSI chief executive officer and the Olympic Council of Malaysia board.

“It was supposed to be out before the 2020 Olympics in May but now with the Games postponed to next year, we suddenly have more time to get the book ready.

“Although my service as a civil servant will end soon, the work on the book will continue. I’ll find the time to write about the history of the NSI and my career later, God willing, ” said Dr Ramlan.

“Publishing a book is not easy and every time I look at the drafts, there’s always something I’d want to change. On top of the book, I still had to attend to patients in the NSI sports clinic. Fortunately, we have a small but dedicated team for this book project and I believe it will be a good read.

“We have interviewed athletes, even going back to Olympians from the early years such as Tan Sri Alagendra and Tan Sri Dr Jegathesan. We collected personal and press photographs and other Olympic material and paraphernalia for this project.

“We want their voices and achievements to be immortalised and I hope this book will inspire future generations of Malaysian athletes.”

The 60-year-old graduate from Universiti Kebangsaan Malaysia, who began his medical career as a houseman at Kuala Lumpur General Hospital in 1988, joined the sports science division of the National Sports Council (NSC) in 1990.

When the NSC moved to Bukit Jalil in 1996, he was appointed as the National Sports Institute Division director (1996-2005).

Although not a bureaucrat, he was chosen to head the NSC as their director general from 2005 to 2007.

Following that he was appointed as the first NSI director general from 2007-2011 when the NSI were administratively extracted out of the NSC as a separate entity, 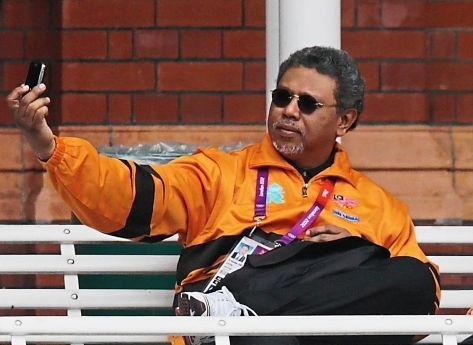 Capturing the moment: Datuk Dr Ramlan taking a selfie at the London Olympic Games at the Lord’s Cricket Ground in 2012.

He was given the honour to head the NSI as the CEO when they were approved as a statutory agency.

He was also the Sports Medicine and Science Advisor to the Minister of Youth and Sports until 2013, when he returned to the NSI as CEO for a second time until his tenure ended in 2016.

His long and storied career in sports medicine is highlighted by his six Olympics with the Malaysian contingent, from Barcelona 1992 to London 2012, five of which he served as the chief medical officer.

During his tenure, he also oversaw the rise of several sports while working closely with world-class coaches John Beasley in track cycling, Yang Zhuliang in diving and the other coaches in badminton, archery, karate, taekwondo and Paralympic sports.

He was also the team doctor for the men’s hockey team for a good 15 years from 1991 and also the badminton squad for various tournaments including the Thomas Cup.

The pinnacle of his career was when he was given the honour of leading the Malaysian contingent as the chef de mission at the 2009 Laos SEA Games and the 2010 Asian Para Games in Guangzhou.

Based on his long years of service, Dr Ramlan believes that athletes, although a specialised group, are in essence a reflection of our society.

Therefore much needs to be done to get our athletes to be world class and performing at optimum levels sustainably and consistently to achieve success. Not only in sports but also life and in whatever career they choose.

“Sometimes episodes of misbehaviour of an athlete is glossed over due to their success and celebrity status. This undermines all the hard work put in over the years, using taxpayers’ money and funds from private sectors.

“Discipline and commitment to the national cause are of paramount importance, not negotiable. But having said that, some athletes may also suffer the indignity and unfairness of unreasonable expectations, perpetuated by a lack of evidence-based management, lack of focus on performance solutions and a predisposition to convenient formulaic decision-making.

“Was it due to positive factors that need to be maintained and refined or was it all obtained despite prevailing weaknesses that we fail to look at?

“Some athletes will resort to doping because they don’t want to work hard, preferring a shortcut to success, ” added Dr Ramlan.

“Anti-doping is not the sole responsibility of Adamas but needs to be shared with coaches, managers, support staff, NSA leaders and even parents or family.

“The main issue is not a lack of awareness or education but integrity. Without that integrity, no amount of education will achieve much, as we are merely applying a band-aid instead of working on the root cause.

“Therefore, properly conceptualised and executed sports development should not be focused on facilities or any such material aspects.

“Positive values need to be inculcated in the athletes as early as possible, preferably before puberty. After that, it is an uphill task, as they become quite resistant and unable to develop all the necessary attributes to the fullest within good time.

“This is why talent identification needs to be done early and training needs to encompass not only the sporting aspects but also include the teaching of positive values, mind and culture.

“Every athlete’s journey is different, so his or her programme needs to be tailored towards specific individual needs in every aspect of their sport and also beyond that. They have sports in their lives as a focus but they also have their lives to manage.”