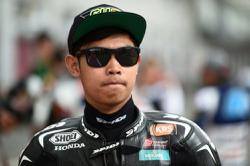 Josiah Ng take off his shoes after the competition. - Filepic

PETALING JAYA: There is more than one reason for ZK Racing riders to shine as they get ready for the start of the new season of Asia Talent Cup and CEV Europe Championship.

Josiah, through Sports Empowered company, has been working as the sports performance coach for the past few weeks to help the ZK Racing riders get ready for their 2021 racing season.

The Asia Talent Cup opens as the support event for the season-opening Qatar MotoGP at the end of March while the CEV Europe Championships kicks off in Estoril, Portugal at the end of next month.

Adam, Syarifuddin and Syarifuddin will ride in CEV Europe Championship while Sharul, Hakim and Danial are down for the Asia Talent Cup.

Josiah is delighted to share his expertise with the riders.

“My job is to get the riders to achieve the peak physical and mental condition for the upcoming championships, ” said Josiah.

Josiah said his job was made easier as the riders were receptive.

“I did changes to their daily training routines and they are open to it, ” said Josiah.

“I guide them to change their mindset, making them believe what they are capable of. Hopefully, we will see better results in their approach to racing.”

“His vast experience and knowledge are the reason why we brought him in to help our talents, ” said Azhan.

“We give the boys the best support in the hope that they can become champions one day.” 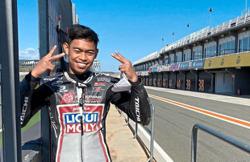