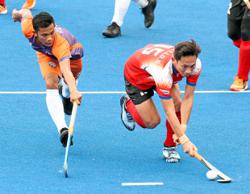 KUALA LUMPUR: The Tour series in England will set the stage for the ‘Speedy Tigers’ to showcase a new way of Malaysian gameplay.

National men’s hockey head coach, A. Arulselvaraj said he is eager to see how his charges adapt to the new playing system during their month-long tour, which will kick start next Sunday.

“It’s all about angle play and controlling the game – that’s the foundation of this new gameplay,” said Arul.

“I’ve never created this system before. I’ve spent a lot of years and hours to implement the system, which was tailor-made based on the players that I have.”

Although the former national player was glad to see his vision of play pan out well during the training session, he said the real challenge will be on how his squad could translate what was required of them on the field.

He hoped that everything that he had planned would turn out well and challenged his squad to use this tour as a platform to showcase their capabilities and open their opponents’ eyes.

The ex-Universiti Kuala Lumpur coach admitted that the lack of physical training ahead of the tour due to the Covid-19 pandemic might be a hindrance for the players to play well on the field, but lauded his players’ efforts to beef up their strength and muscle on their own.

“We are going against all odds as other teams in the UK had proper training sessions and participated in other competitions prior to joining the tournament.”

Despite the struggles that they went through in these trying times, Arul was proud of his players’ commitment as some of them invested in their own treadmill, bicycle and other exercise equipment.

A total of 23 players who departed yesterday are preparing for next year’s Hockey Asia Cup, which is also the qualifier for the 2023 Hockey World Cup apart from gaining points for world ranking.