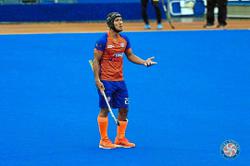 It was UniKL’s third straight Premier League triumph in as many years.

UniKL ended their campaign in the league unbeaten at the top of the table with 19 points from seven matches, winning six and drawing one.

“This has been a great victory for us after retaining the Charity Shield. The team played well to earn this win. Congratulations to all the players for working hard throughout the match and as expected, Maybank came very strongly against us in attack and defence, ” said a jubilant UniKL team manager Datuk Amir Azhar Ibrahim.

The goal came in the 49th minute off a goal-mouth melee. The initial move was orchestrated by team captain Muhammad Marhan Mohd Jalil, who slipped the ball past two Maybank defenders from the right goal line.

Izwan Firdaus Ahmad Tajuddin picked it from there and relayed the ball to Tengku Ahmad Tajuddin who had to break free from a tight situation in front of the goal-mouth before netting the ball into the net.

The match got off to a fast pace with neither team having the better of the other in the first two quarters.

Defending champions UniKL needed to win this match at all costs to secure the Premier League title. Anything short and it would have spelled disaster to the varsity team’s hopes as Terengganu lurked dangerously behind.

UniKL went into the offensive from the very beginning and had four penalty corner opportunities but Muhammad Razie Rahim and company could not find the break as goalkeeper Mohd Zaimi Mat Daris was in sparkling form, making over six saves.

Maybank, who are also in the running for the title, were not only solid in defence but also highly motivated to score, mounting a barrage of attacks.

“Maybank threw everything they got but luck was not on their side. Credit goes to our team who gave everything to win the match. Now we focus on the TNB Cup after this, ” said Tengku Ahmad Tajuddin. 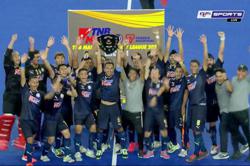 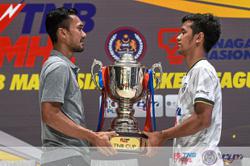