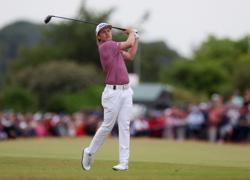 (Reuters) - A dawn scramble to find his clubs had Adam Scott at "panic stations" ahead of his early tee time for the opening round of the Australian PGA Championship but the former world number one shook off the drama to make a bright start at Royal Queensland.

The search for the clubs, eventually found in Scott's manager's room, was a minor hiccup in the Australian's reunion with former caddie Steve Williams on Thursday.

Things otherwise proceeded smoothly for the pair as Scott shot a 66 for the early clubhouse lead before finishing the day in a group tied for fourth at five-under, a stroke behind local co-leaders Min Woo Lee, Jason Scrivener and John Lyras

"It was panic stations ... Steve was kicking doors down," Scott joked of the frantic search for his bag.

Despite the 6 a.m. tee time, a big crowd had already assembled at the 10th hole at Royal Queensland where 2013 Masters winner Scott started his round.

Most were there to see his playing partner Cameron Smith, however, on the British Open champion's long-awaited return to his home state Queensland.

After a busy lead-up of fan, media and sponsor engagements, headline act Smith started slowly but finished with three birdies in his last four holes to card a 68 and lie three shots behind the leaders.

A tired Smith said his brain was a little "foggy" as he made the turn without a birdie and he hoped home fans would not expect him to win the A$2 million ($1.35 million) event co-sanctioned by Europe's DP World Tour.

"I mean, for sure I’m here to try and play my best golf but sometimes you play your best golf and finish 20th," he said.

Min Woo Lee, the brother of twice major-winning women's golfer Minjee Lee, enjoyed an "awesome" day as he rolled in some monster putts to rack up seven birdies in his round of 65.