Ahmad Sarji at Kelab Rahman Putra Golf Club during an interview with TeeUp in 2013.

THE golf industry was steeped in a state loss this week, following the passing away of Tun Ahmad Sarji Abdul Hamid. He was 82.

The tributes to and messages of condolences for Ahmad Sarji, who served as the chief secretary to the government from 1990 to 1996, were numerous and in many cases received from beyond Malaysia’s borders.

So too did Prime Minister Datuk Seri Ismail Sabri Yaakob and his predecessor Tan Sri Muhyiddin Yassin, among a long list of dignitaries and officials of both the public and private sectors. 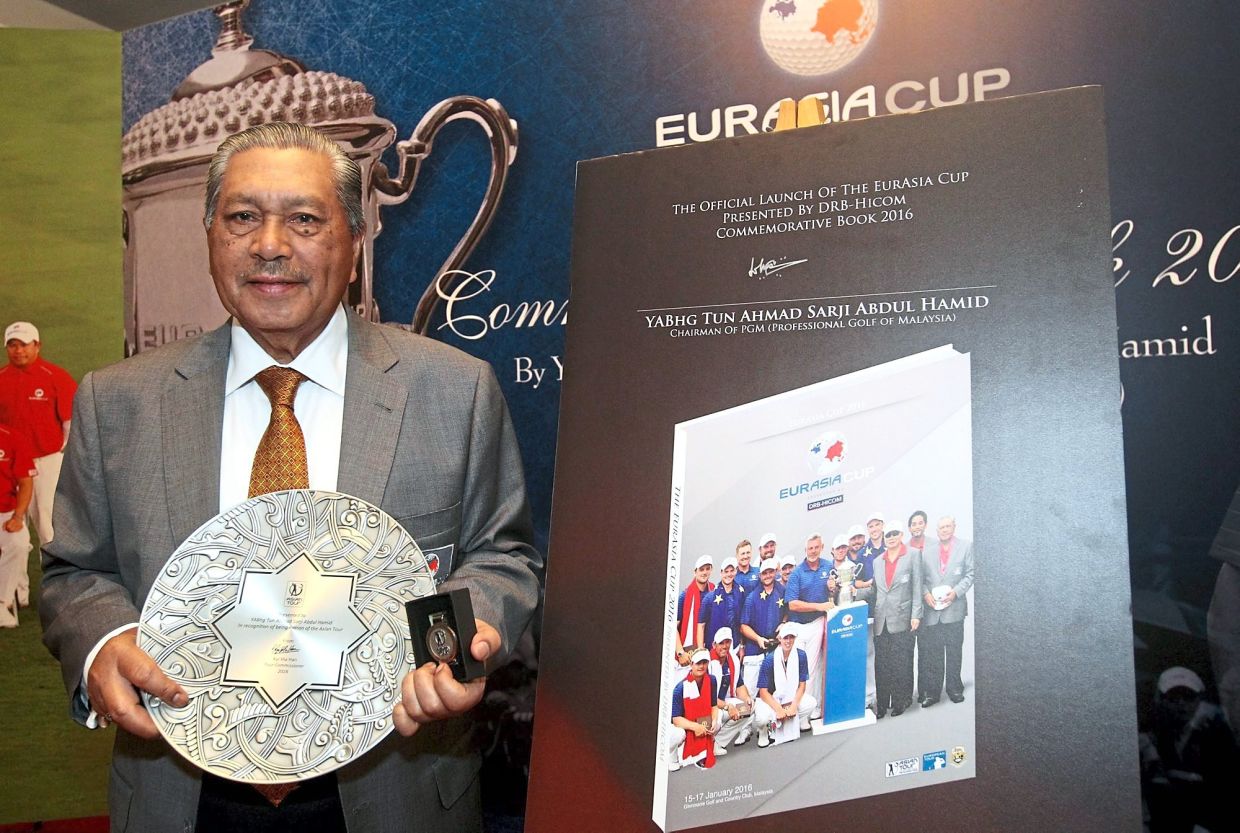 Ahmad Sarji on being announced as patron of the Asian Tour at the 2016 EurAsia Cup commemorativebook launch.

The Oxford Centre for Islamic Studies in the United Kingdom also paid tribute to Ahmad Sarji, and said they were “fortunate to have had him as a member of our board of trustees for over two decades”.

Ahmad Sarji was well known as a champion of Malaysian arts, culture and heritage. He openly expressed his admiration for his boyhood idol Tan Sri P. Ramlee.

But Ahmad Sarji he also had a passion for golf. And when you get a rounded understanding of what he did for the game in this country, both the professional and amateurs ranks, only then does one get a more complete picture of the man and just what the sport meant to him.

He was instrumental in the setting up and running of the Professional Golf of Malaysia (PGM) Tour and bringing to fruition the EurAsia Cup, a biennial series of tournaments between the best players of Europe and Asia.

This week, TeeUp spoke to several personalities in the golf industry about Ahmad Sarji’s standing and contribution to the game. Here are some excerpts of what they said:

Over the last three decades, no man or organisation has done more to uplift the standards and quality of professional golf in Malaysia than the late Tun Ahmad Sarji Abdul Hamid.

From the heydays of the PNB Classic Series to establishing the Professional Golf of Malaysia (PGM) Tour, Ahmad Sarji drove the growth and development of professional golf in the region through his visionary leadership and deeply-rooted passion for the game. His passing is a great loss to our sport and nation.

We were honoured to have Tun Ahmad Sarji as our Patron of the Asian Tour. He played a key role in the success of the EurAsia Cup, while the development of professional golf in Malaysia flourished through his vision and passion for the game.

Everyone at the Asian Tour is deeply saddened to hear the news of his passing. He was a true advocate of the game of golf in our region and an inspirational leader, who helped push the boundaries for our sport.

Tun Sarji did so much for the golf industry with his vision to elevate the standards of the game in Malaysia.

MST Golf had the privilege to work with Tun, to realize his vision, including setting up the PGM Golf Academy and brought in EurAsia Cup and TPC brand to Malaysia.

In addition to establishing tournaments for the local Tour players, Tun also wanted to, and did, improve the local standard of play and skill set, and MST Golf was part of it – tasked with helping set up the PGM Players Development Programme and subsequently the Road to Olympics Programme, where Malaysia managed to qualify and send the maximum four players to the Rio 2016 Olympics.

We have the upmost respect for Tun, for the way he worked on golf matters, full of passion. The golf industry will miss him greatly.

Many of us are very thankful and honoured to have had the opportunity to know Tun. He had a tremendous amount of passion for golf and his goal was always to elevate us, Malaysian professionals in the eyes of the world. And he did that through the PGM Tour, through the ADT (Asian Development Tour), as well as the Eurasia Cup.

I will always remember him fondly for his kind and encouraging words. He was our “Bapa” of professional golf. He created playing opportunities for us, he set goals for us and he masterminded the Eurasia Cup. We will definitely miss him.

I remember, he would follow the leader flights during the PGM or ADT tournaments and he would sometimes stand behind us to watch and cheer us on. It just goes to show how much he loved the game.

My greatest memory of Tun was when I first turned professional, in 2015, and had the lead going into the final day.

But I didn’t play well enough to win and I was obviously disappointed, but he pulled me aside and had a chat with me. That was also the first time I had a chance to speak to him.

He told me that he wanted to see me at the 2016 Olympics in Rio and that he believed I could do it. He said that I should always try to play my best so that I could qualify. I took his words to heart and achieved the goal.

I believe that without Tun, professional golf in Malaysia would not have progressed as much as it did.

Thank you Tun, and may you Rest in Peace.

We just lost one of the most incredible people in Malaysian golf, who was at the forefront of introducing and managing the local professional Tour.

The late Tun Ahmad Sarji was a giant of the professional golf in this country and it will be hard to find someone as passionate as him to fill his role. Our deepest condolences go to his family.