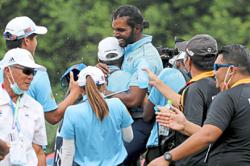 The 16-year-old, who lives in Melbourne, Australia, after emigrating there with her family in 2015, has been making waves in the amateur golf scene Down Under since last year.

To date, Jeneath has five titles under her belt – the latest being the Australian Girls’ Amateur in Canberra last week.

Jeneath cruised to a five-shot victory at the Gold Creek Country Club to earn herself an invitation to the Women’s Australian Open, a tournament jointly sanctioned by US LPGA Tour and Australian Ladies Professional Golf (ALPG) Tour, next year.

The Victoria state golfer made her presence felt not only in the junior event as she also successfully defended the Riversdale Cup, which is one of the biggest amateur Open championships in Australia, in February.

Jeneath started the year with a bang winning the Victorian Junior Amateur and can boast of finishing no lower than 11th in 17 appearances in all competitions since mid-2019.

This should make her a strong contender for a place in the three-woman squad to the SEA Games in Hanoi later this year.

The competition is expected to be stiff with Jeneath needing to slug it out with United States-based Alyaa Abdulghany, Natasha Andrea Oon, Ashley Lau, Winnie Ng and teen prodigy Mirabel Ting.

Alyaa, Natasha and Ashley were in the team who won silver at the 2019 Philippines SEA Games.

Jeneath is thrilled at the prospects of playing in the region’s biggest multi-sport Games for the first time and believes she stands a chance of getting into the team.

“Representing Malaysia at the SEA Games is definitely one of my main goals for this year, ” said Jeneath, who’s an 11th year student at the Glen Waverly Secondary College in Victoria.

“Hopefully I’ll continue my good form and stake my claim for a SEA Games call-up.

“I’m still a Malaysian passport holder and I look forward to donning the Malaysian colours in many more competitions in the future.

“My current plan is to continue representing Malaysia even when I turn professional, ” said Jeneath, who aims to secure a sports scholarship to study and play collegiate golf in the United States in 2023.

“I’ve just changed to a public school this year. My previous private school (St Catherine’s School) and my current school are more focused on academics rather than golf.

“Since living in Australia for the last five to six years, I’ve gained plenty of experience from playing in some top prestigious events which have helped me improve my game.”

On the opportunity to rub shoulders with the world’s best in the Women’s Australian Open next year, Jeneath said: “Very excited as I think that I will be able to learn from the pros next year and that can help me sharpen my game for the future.

“I hope to emulate the foosteps of my idol Lee Min-jee (world No. 10 and four-time LPGA Tour winner from Australia) who has made it big on the LPGA Tour. I idolise her as I have won a few events that she has won previously and I think she is a very inspirational player for many juniors.

“I’m really happy to see my name on the (Australian Girls’ Amateur) trophy, especially together with Min-jee (winner in 2013).”