AL RAYYAN, Qatar (Reuters) - South Korea did what they had to do by snatching a 2-1 win over Portugal with a stoppage-time goal by Hwang Hee-chan on Friday to keep alive their dreams of a last-16 spot at the World Cup.

Then the hard part.

In what was perhaps the strangest ending to a game at a World Cup that has oozed late drama, mind-boggling upsets and unexpected twists, the Taeguk Warriors gathered in a tight group at the centre of the pitch in the Education City Stadium after the final whistle and waited.

With mobile phones out, the players and thousands of face-painted Korean supporters, their eyes locked on tiny screens, held their collective breath waiting for the result of the other Group H match between Uruguay and Ghana, which would ultimately decide their fate, play out across Doha at Al Janoub Stadium.

"While waiting for the result of the Uruguay and Ghana match it was difficult," said goalscorer Hwang, whose heroics earned him man of the match honours. "But we proved once again we can make it to the knockout phase."

For what seemed an agonising eternity, but in reality was closer to 10 minutes, the stadium that had rocked in wild celebrations when Hwang fired past Diogo Costa fell quiet.

It remained that way until the final result flashed on screen that Uruguay had beaten Ghana 2-0 thereby allowing the Koreans to go through by the slimmest of margins.

Portugal topped the group but the Koreans edged out Uruguay on the second tiebreak - number of goals scored.

The result sparked another round of celebrations among the Korean supporters with many crying, tears pouring down their cheeks, while the players hugged and jumped on each other before running down to their fans and applauding them.

"I would like to thank all the Korean supporters. I'm glad I was able to give this present to them, more than anything I would like to say I am very, very proud," said Hwang.

"When I went on as a substitute a lot of team mates said that we trust you so that ended up as a good result."

South Korea coach Paulo Bento, who was suspended for the game after picking up a red card in the Ghana contest, paced back and forth in a corridor as the minutes ticked, unable to join his men on the field, the angst written across his face.

It marks only the third time that South Korea have made it to the round of 16 and they will be determined to try to match their best result - reaching the semi-finals at home in 2002.

"I cannot compare because I did not know the Korean team back in 2002," said assistant coach Sergio Costa. "I can tell you what it is now it is a team that is well organised and have players with high individual skills.

"I think they deserve what we have been accomplishing." 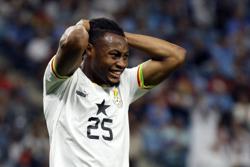