LONDON (Reuters) - Southampton's biggest challenge, and maybe mission impossible, will be to keep Erling Haaland off the scoresheet when they visit Premier League champions Manchester City on Saturday.

Unbeaten City have scored more goals than any team in Europe's leading five leagues this season and will go top if they win or draw, with leaders Arsenal hosting Liverpool on Sunday only a point clear with an inferior goal difference.

Haaland has bagged 14 of City's 29 league goals -- with hat-tricks in his last three home matches and more scoring records beckoning.

"It's not just his numbers, it's the impact he's having on defenders mentally," former Liverpool defender Jamie Carragher said on Sky Sports.

"I think defenders and players up and down the country will be going into the training grounds and they will be talking about Erling Haaland. How do you stop him?"

The 22-year-old striker might have had another treble in Wednesday's 5-0 Champions League demolition of FC Copenhagen but manager Pep Guardiola took him off at halftime after he scored twice -- taking his tally to 19 goals from 11 games for City.

Worryingly for Southampton, the Spaniard said he wanted to save Haaland for Saturday.

"If the game would have been tight Erling would have continued but it is better to rest and think of Southampton, a team we were not able to beat last season," Guardiola told reporters.

Hasenhuttl is seemingly on borrowed time, not for the first time in his tenure, with the south coast club in 16th place on seven points after four defeats in their last five games.

"We know what team we are facing at the moment but I also know that we drew twice against them last season," Hasenhuttl told reporters on Thursday. "We were one of the few teams that took points at the Etihad.

"If you reduce Man City to Erling Haaland ... there are more players that you have to concentrate on, if you look (just) at Erling Haaland you will also not win this game."

City will be without defender Kyle Walker, who had groin surgery this week, while Southampton have no major injury worries.

Liverpool were held 3-3 at home last Saturday by Brighton & Hove Albion, who are fourth and host third-placed Spurs in Saturday's late game.

Leicester City, who thrashed Nottingham Forest 4-0 on Monday for their first league win of the season, hope to push on upwards when they travel to Bournemouth on Saturday when Newcastle United host Brentford.

Manchester United, thrashed 6-3 by Manchester City at the Etihad last Sunday, are at Everton on Sunday, when West Ham United host Fulham and Leeds United travel to Crystal Palace. 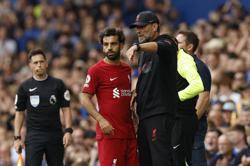