(Reuters) - Porto substitutes Zaidu and Galeno were both on target as they beat Bayer Leverkusen 2-0 on Tuesday to seal the Portuguese side's first victory in this season's Champions League group stage.

Nigerian defender Zaidu smashed home a perfect header in the 69th minute from a cross by forward Mehdi Taremi six minutes after coming on to replace Wendell.

Brazilian forward Galeno extended their lead in the 87th minute after his shot from inside the box found the net after taking a huge deflection off Leverkusen keeper Lukas Hradecky.

Leverkusen striker Callum Hudson-Odoi put the ball in the net in the 15th minute from the edge of the six-yard box but his effort was chalked off after a VAR review found midfielder Robert Andrich had fouled Porto forward Pepe Aquino in the build-up.

Taremi tapped in a cross in the 41st minute but his effort was also ruled out by VAR for handball, while Leverkusen were awarded a penalty just before halftime, but Patrik Schick's spot kick was superbly saved by Porto keeper Diogo Costa.

Porto are second in Group B, level with third-placed Leverkusen on three points after three games, while Club Brugge top the table with nine points after a 2-0 win over Atletico Madrid. 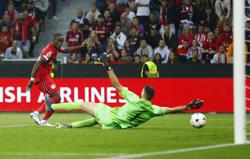