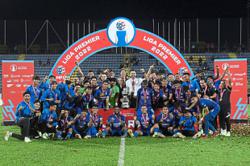 Naturalised Indonesian player Jordi Amat made his debut for Johor Darul Ta'zim in the last 16 stage of the AFC Champions League against Urawa Red Diamonds in Saitama.

PETALING JAYA: Johor Darul Ta'zim's fairy tale run in the AFC Champions League ended when they were eliminated after going down 0-5 to Japan's Urawa Red Diamonds in the last 16 stage in Saitama on Thursday (Aug 19).

The Malaysian side found it hard to get going against a more stronger side that have won the continental showpiece event twice previously (2007 and 2017).

Urawa had a dream start when JDT goalkeeper Farizal Marlias gave away a penalty in the ninth minute and Alexander Scholz did not made mistake from the spot.

Sweden national team player David Karlsson scored a brace in the 19th and 39th minutes to hand Urawa a comfortable 3-0 lead at half-time.

In the second half, substitute Kasper Junker had a night to remember when he scored two more for Urawa in the 84th and 90th minutes to seal Urawa's place in the quarter-finals.

The 30-year-old Amat was signed up by JDT in late June and is eligible to represent Indonesia having been given citizenship recently.

JDT, however, deserved credit for being the first Malaysian side to play in the knockout rounds of the continental showpiece tournament.

JDT defied the odds to top Group I, which also included the likes of Japan's Kawasaki Frontale and South Korea's Ulsan Hyundai. 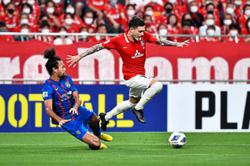