PETALING JAYA: Negri Sembilan only earned promotion to the Super League this year but they are proving to be the surprise package so far.

Negri recorded their fourth straight win by beating Petaling Jaya City 2-0 at the MBPJ Stadium on Saturday to move to third spot in the standings.

Brazilian import Gustavo dos Santos scored a brace in the 11th and 62nd minutes for the visitors.

Negri have amassed 32 points after 16 matches while Sabah are second with two points more after going through 15 matches.

A place in the top three looks good for Negri as Terengganu will find it hard to play catch-up with only 20 points despite playing 14 matches.

But Negri coach K. Devan does not want his charges to take things easy in the few remaining Super League matches.

“We need to stay focused to continue to get positive results in the next two or three matches.

“We must not be comfortable to be in the top three at this point as we have six matches left to play, so we can only see where we stand after two or three more matches.

“If we can continue to collect the full points, we can even finish in the top two.

“But it’s not our only objective as it’s more important that we take each match as it comes,” said Devan, who was brought back to take charge of Negri again this year for the Super League campaign.

Negri were promoted after winning the Premier League last year.

Devan was pleased with the manner of the victory although he admitted his players were exhausted due to the hectic schedule.

“We did not let in any goals. We did not give many chances to our opponents to score.

“I am happy with this performance. We got three points on their turf (playing away) and defended well as a team,” said Devan.

PJ City coach P. Maniam expressed confidence that his side can improve on their position with seven matches left to play.

PJ City are lying second from bottom on 12 points after 15 matches.

“We need to look ahead as the next few matches will be very important. If we can get two or three wins, we have a chance to be in the top eight or ninth,” said Maniam. 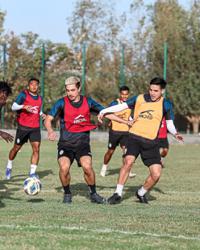