PETALING JAYA: The wings of the Canaries were clipped in the Islands of Gods.

Kedah failed to qualify for the AFC Cup Asean zone final after they were beaten 2-1 by Indonesian club PSM Makassar at the Stadion Kapten I Wayan Dipta in Bali, Indonesia, yesterday.

The first-half belonged to Makassar as they created the most chances, 15 to be precise.

Kedah looked devoid of ideas and were struggling to string some passes or potent plays to threaten the home side.

In the second minute itself, Makassar got their first chance when Japanese playmaker Kenzo Nambu’s shot hit the post.

Dutch midfielder Wiljan Pluim was truly the dangerman, and for a player built like a heavyweight boxer, it wasn’t his physique that stood out.

It was his movements, passes and reading of the game that made the difference.

And it was one of his passes that led to the first goal.

His one-two with Everton Mendonca released Rizky Eka Pratama, who made a low-drilled cross, which Sayuri finished with aplomb.

Kedah had goalkeeper Ifwat Akmal Chek Kassim to thank as he kept the scoreline respectable with four brilliant saves.

At the start of the second-half, Kedah still struggled to turn possession into chances.

Makassar, though, had other ideas and punished them again.

Their Cape Verdean centreback Fernandes headed in a corner taken from midfielder Muhammad Arfan in the 53rd minute to give Makassar their second goal.

Fernandes went from hero to villain after he was given a second yellow and sent off for a dangerous lunge on Ronald Ngah in the 59th minute.

Kedah finally reduced the deficit when winger Fayadh Zulkifli unleashed a thumping shot to beat Pratama in the 85th minute. 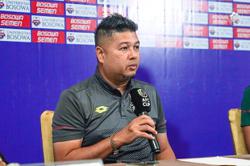