STUTTGART, Germany (Reuters) - RB Leipzig dropped points at the start of their Bundesliga season, drawing 1-1 at VfB Stuttgart on Sunday despite taking the lead and missing a bagful of chances in the second half.

Leipzig, who last week lost 5-3 to Bayern Munich in the German Super Cup, got off to a flying start with 2021/22 Bundesliga player of the season Christopher Nkunku slotting in for the lead in the eighth minute.

They gradually eased off and Suttgart found space to attack, with Naouirou Ahamada's strike from the edge of the box levelling in the 31st minute with France's youth international first career goal.

Leipzig, who finished fourth last season and won the German Cup, pushed forward after the break but were left wondering how they failed to score in a one-sided second half.

Dani Olmo also could not beat Mueller in the 73rd as Leipzig piled up a total of 27 efforts towards goal to Stuttgart's 11.

Champions Bayern Munich kicked off the season on Friday with a sensational 6-1 demolition of Eintracht Frankfurt. 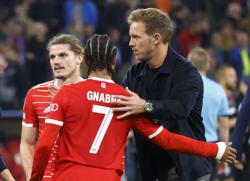