I BELIEVE JDT will be champions. If you look at their performance in the second leg semi-final, they dismantled Terengganu with three goals in just 15 minutes. They also have many players who can deliver the goals. JDT coach Benjamin Mora has to be careful of his counterpart, Bojan Hodak because he has good experience in finals. It will be a close contest but JDT for the win. JDT are an attacking team and if they get an early goal it will be tough for Kuala Lumpur to come back because they have to attack and open up a little. But if JDT can’t score early goal, KL will rely on quick counters. However, JDT are hitting form at the right time and Bergson Da Silva has been scoring too, so I believe the Southern Tigers have an edge. ON paper, JDT are favourites but I believe it will be a close game. They should not underestimate KL who have quality foreigners, especially Romel Morales, who has 10 goals. If JDT do not take their chances, KL will only get stronger and have a chance of shocking them. But I believe JDT have top players in every department and anyone of them can deliver the win.

WE all know JDT’s quality. Winning eight Super League is no joke. All the players have Cup final experience and will put that to good use tonight. Bergson, Safawi Rasid and Gonzalo Cabrera are players capable of causing damage to any team. However, KL are slowly making a comeback and are bent on ending the 32-year wait for Cup success. JDT’s strength in depth will push them to victory. 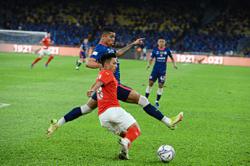