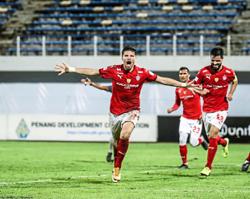 PETALING JAYA: Sarawak United got off to a superb start in the Malaysia Cup when they shocked Penang 3-1 in the Group A match at the City Stadium in Georgetown on Sunday.

Nigerian striker Uche Agba starred for the Crocs after scoring a brace in the 47th and 58th minute.

The other goal for the Premier League runners-up came through leftback Khair Jones in the 54th minute.

Penang, who finished third in the Super League, netted a consolation goal in the 56th minute through winger Al-Hafiz Harun but it was certainly not the start that they had hoped for.

In the other Group A match, Kuala Lumpur beat Pahang 3-1 at the Cheras Football Stadium.

Midfielder Romel Morales scored twice for the City Boys in the 47th and 73rd minute after leftback Daniel Ting had delivered the first goal in the 19th minute.

Pahang’s goal was an own goal from Giancarlo Gallifuoco in the 79th minute.