PETALING JAYA: Defending champions Johor Darul Ta’zim (JDT) have been handed an easy path to the knockout stage of the Malaysia Cup.

The draw paves the way for them to lift the trophy for a third time as the prestigious tournament celebrates its 100th anniversary.

The Malaysia Cup, which runs from Sept 25-Nov 30, is making a comeback following last year’s absence due to the Covid-19 pandemic.

It also marked the first time Asia’s longest-running competition was not held since World War II.

The Southern Tigers, fresh from their eighth successive Super League triumph, have been grouped with Petaling Jaya City, Sabah and fourth-place finishers of the ongoing Premier League that is due to be completed on Tuesday.

JDT are expected to bulldoze past both PJ City and Sabah, who finished seventh and ninth respectively in the league, to top the group.

In their Super League campaign this season, JDT won all four matches against these two clubs, scoring 11 goals and conceding just once.

But JDT will certainly tread with caution given that they have found it harder to replicate their league dominance in the competition.

Group B is the “Group of Death” as it features two of the most successful sides in Cup history – 33-time champions Selangor, Perak (eight times) and 2001 champions Terengganu, who finished third in the league. The other team will be the third-placed side from the Premier League.

However, Perak, who last hoisted the Cup in 2018, are no longer a force they used to be after they were relegated from the Super League for the first time in 31 years. Terengganu and Selangor should advance to the last eight as the top two finishers.

Group A promises to be an explosive affair as it pits Penang, Kuala Lumpur and Pahang, who boast 11 Malaysia Cup titles between them.

To date, first-placed Negri Sembilan and second-placed Sarawak are the only two Premier League sides confirmed of their Malaysia Cup spots. The remaining three will see a battle between Police, Kuching United, Kelantan and Kelantan United. 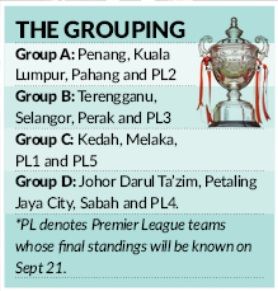