In Ghani the MFL trust – CEO appointed as new president

As such, Ab Ghani will have to relinquish his post as MFL chief executive officer (CEO). However, he will continue to be the acting CEO until a new person is appointed.

The MFL, in a statement, said the appointment was unanimously agreed by the MFL Board of Directors at a special meeting held online after it received Hamidin’s resignation letter dated Aug 12.

“We believe that Datuk Ab Ghani can continue the legacy left behind by Datuk Hamidin to thrust the MFL forward to a brighter and more positive direction.

“We admit that we are saddened by his (Datuk Hamidin’s) decision but we must respect his decision. We are extremely grateful for all the contributions and high commitment given by Datuk Hamidin during his time helming the MFL,” MFL Board of Directors member Joehari Ayub said in the statement.

Hamidin, who is also the Football Association of Malaysia (FAM) president, was unanimously appointed by the MFL Board of Directors to replace the Tunku Mahkota of Johor, Tunku Ismail Sultan Ibrahim, as MFL boss in September 2019.

He also played a key role in ensuring the continuity of the Malaysia League when the world was still plagued with uncertainty due to the Covid-19 pandemic.

Meanwhile, the MFL said that Ab Ghani, who became a member of the MFL Board of Directors in April 2019, is the fourth MFL president after the Yang di-Pertuan Agong Al-Sultan Abdullah Ri’ayatuddin Al-Mustafa Billah Shah, Tunku Ismail and Hamidin. — Bernama 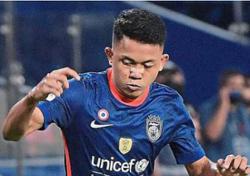