Soccer-Allardyce rues lack of firepower as West Brom go down LONDON (Reuters) - West Bromich Albion manager Sam Allardyce bemoaned his side's lack of efficiency in front of goal as he suffered the ignominy of relegation from the Premier League for the first time after a 3-1 loss at Arsenal.

Knowing that they had to take the game to Arsenal and avoid defeat to have any chance of staying up, West Brom created plenty of chances but managed to get only one of them on target.

"One of our major problems is finding the right opportunities when we get to the final third to create and score more goals," Allardyce told BT Sport.

"We had the opportunity to take a lead but we failed to find the right ball, failed to produce the right cross or the right finish, and then ten minutes, five minutes sloppiness, Arsenal showed their quality of finishing that we couldn't find."

The 66-year-old, who took over at West Brom in December after Slaven Bilic was sacked with the club in 19th place in the standings, dismissed suggestions that he might have needed more time.

"I'm not saying we would have avoided relegation but we should have been closer, we should have taken it down to the last three games, based on how we performed. The creating of chances has been there but the converting has not," he said.

Allardyce refused to be drawn on whether he would remain at the club to try to bring them back up from the Championship next season.

"That's too early to even consider or talk about that for me, it's about getting over the disappointment and when the time is right to talk about what is going to happen next season," he said.

"In my mind, tonight is just about saying to the lads you gave it all, get back, have a day off and get ready for Liverpool at the weekend." 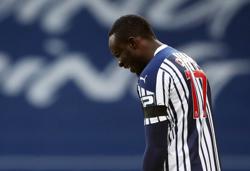