In the thick of the action: Wong Kam Fook (right) grabbing the ball during the match against West Germany in the 1972 Munich Olympics.

PETALING JAYA: The current generation of footballers and fans might not know much about the heroics of Wong Kam Fook.

The goalkeeper was a member of the 1972 Munich Olympics squad and was between the posts when Malaysia opened their campaign against hosts West Germany at the Olympic Stadium on Aug 27.

The national team held their own in the first-half in front of 60,000 fans before letting in three goals after the breather.

The Perakian also played in the remaining two group matches – beating the United States 3-0 with goals from Shaharuddin Abdullah, Ibrahim Salleh and Wan Zawawi Wan Yusof, before going down 6-0 to Morocco where Kam Fook was injured in the 30th minute and was replaced by Lim Fung Kee.

It was the national football team’s first and only appearance at the Olympics to date.

Kam Fook also holds the distinction of keeping a clean sheet in the Olympics qualifying tournament in Seoul. The Malaysian team defeated Japan 3-0, hosts South Korea 1-0, Taiwan 3-0 and the Philippines 5-0.

“Most would remember that I did well against Germany but I feel my best performance for the national team was in Seoul where we didn’t concede any goals, ” said Kam Fook.

“For me, a win is always a collective effort. The national team back then had players who were good at what they do. My mindset for all the matches is always the same... to push myself to deliver the best.”

For most footballer featuring on the world stage would have whetted their appetite for more but Kam Fook was contemplating hanging up his gloves. “I was working with Kinta Electrical Distribution Company (KED) at that time and most of my workmates have moved up the ranks and I was the only guy stuck at the same post.

“I asked my manager why I was not getting any promotions and he shot back asking how many days I have been off from work, ” said Kam Fook.

“Times were different back then, as footballers you don’t earn much. We were paid RM2 as training allowance and a match-winning bonus of RM50 with the state team.

“After the Olympics, I wanted to quit the national team to focus on my career at KED.”

But as fate would have it, Kam Fook received an offer to play professionally in Hong Kong.

He turned out for Caroline Hill, a club he played for until 1974 before going on to play for 10 other clubs, which included South China, Seiko Rangers and Urban Service Department.

In 1984, Kam Fook opted to play part-time as he was pursuing his studies in electrical engineering before quitting the game in 1997. Despite facing hardship as a footballer during his time, Kam Fook is however supportive of his son, Oscar Wong Tse Yang, who is also a goalkeeper.

Oscar was signed by Premier League winners Penang this season but did not make the starting XI.

“My mother was not very supportive of my involvement in football and I know how it felt as I was passionate about the game.

“I can’t stop my son from pursuing what he loves. I fully support his decision and I hope he can make his name in football.

“At the moment, he’s without a team and I have advised him to earn his coaching badge.

“We need to upgrade ourselves and be ready for the future. Those days, I played and also attended trade school in Hong Kong which paved way for a career after football.” 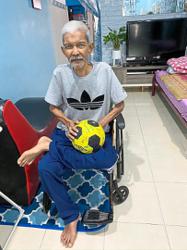