FRANKFURT, Germany (Reuters) - RB Leipzig wasted their chance to join champions Bayern Munich at the top of the Bundesliga after drawing 1-1 at Eintracht Frankfurt on Saturday.

The Bavarians had earlier slipped up at home against Werder Bremen by the same score, giving Leipzig a chance to join them on 19 points with a win.

Instead it was the hosts who scored first, with Aymen Barkok breaking the deadlock two minutes from halftime.

The Morocco international slotted in after three Leipzig defenders had failed to clear a deep free kick floated in from the halfway line.

The visitors, who face Paris St Germain in the Champions League on Tuesday, levelled with Yussuf Poulsen's superb flick from Angelino's well-timed cross in the 57th.

It was Frankfurt who had the better chances to score again in the second half, with Leipzig's best effort coming in the 88th when keeper Kevin Trapp denied Poulsen from close range.

Leipzig drop to third place on 17, with Bayer Leverkusen in second on 18 and Bayern top on 19. 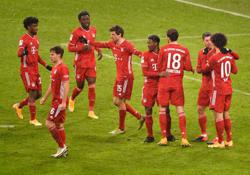