Velez wants to make final fling with Fighters a memorable one 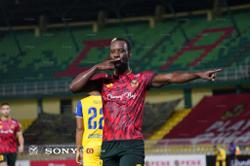 Time to move on: Nicolas Velez training with his teammates at the Felda Training Centre in Bangi. — Photo courtesy of Felda United

PETALING JAYA: Nicolas Velez wants to make sure he ends his Felda United journey with a bang.

The Football Association of Malaysia announced that the relegated Super League side are barred from participating in the M-League next season after they failed to meet certain requirements relating to their financial standing.

And now the Fighters will gear up for their final battle, the Malaysia Cup, before calling it a day.

And it will be no easy clash as they face Premier League champions Penang in Georgetown today.

“Of course we all know about the situation of the club, but we are focused on finishing the season on a high.

“We will try to do justice to our fans. We’re looking at a good run as there’s a lot of fight left in us despite the circumstances. For now our future will take a backseat.”

The Argentine striker said preparations have gone well and they are ready to maul the Panthers.

“We prepared well during these three weeks. The players are still focused and we’ll just go out there and play our game.

“We know we can hurt them,” said the 30-year-old, who has played for Negri Sembilan.

“However, Penang are no pushovers as they have good players like Casagrande and Endrick Dos Santos.

“In this kind of game, you must be 100% focused for 90 minutes. One mistake and you’re finished and we don’t want that.”

At the beginning of the season, their foreign quartet of Velez, Khairul Amri, Ryutaro Megumi and Frederic Bulot sizzled with combination plays and attacking movements but upon the league’s resumption, they fizzled out.

In 11 matches, Felda only won one, drew four and lost six.

“This season was full of ups and downs for us. After the JDT game (1-1), our momentum was very good and when the league resumed, we were hit by injury problems which really affected us.

“Anyway all that is over now, it’s time to move on. As for my future, yes I would like to stay longer in Malaysia.

“I love the country and the people, I’m looking forward to more time here.”