PETALING JAYA: The Asian Football Confederation (AFC) are facing a nightmare as they try to end the AFC Champions League (ACL) this year. Only 48 of the 192 matches have been played and there is a massive backlog of fixtures.

The ACL involves 32 clubs from 12 countries in eight groups, some of which had reached two rounds of the group stages before the competition’s suspension in March.

AFC secretary-general Datuk Windsor Paul said they were looking at various possible solutions to ensure the ACL will be completed this year and a decision is expected to be announced at the end of June.

He added that the fact that the AFC is divided into two – the west and east regions – makes it harder to have the competition completed in a mini-competition similar to the UEFA Champions League which will be held in Lisbon, Portugal on Aug 23.

To make the situation even tougher, Beijing has ordered a lockdown after the re-emergence of Covid-19 cases.

“We can’t hold the competition in one host country because our ACL is divided into two regions. On top of that, borders of most countries in the region are still closed due to the Covid-19,” said Windsor.

“We are looking at solutions and we do have several options in hand. However, the fluid situation of the pandemic in the region makes it hard for us to make a final decision.”

“We need to consider each country’s regulation like border restrictions and quarantine period. We also need to look at FIFA and each country’s domestic football calendar before slotting in ACL matches.”

“We have been in touch with member nations every week to find a solution. Among the options is to change the format of the competition to enable the ACL to be concluded this year.”

Windsor added football is in the “force majeure” situation – when obligations may be scrapped due to extraordinary situations – and tough decisions need to be made.

“It’s too fluid. A decision made today may not be suitable the very next day. We will continue to observe the situation and hope that by the end of June, the situation improves so ACL football can resume,” said Windsor. Aidil: JDT not home-free in ACL despite advantage 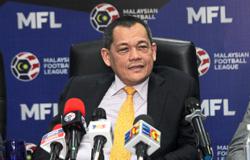