Julfaddli was not even in the initial squad but got the nod after Jellson Jabillin, a national diver, pulled out at the last minute because of an ankle injury.

But the chance to pair off with Gabriel must have lifted Julfaddli’s spirits as he pulled through all six dives without slipping up at the National Aquatic Centre in Bukit Jalil yesterday.

“I partnered Jellson in the 2018 Sukma in Ipoh but he couldn’t make it this time,” said the 20-year-old Gabriel, who splashed to silver in the men’s 3m springboard synchro event at the Birmingham Commonwealth Games in July.

“I’ve never partnered Julfaddli before and we only trained together during the official practice session yesterday (on Monday).

“We could not train earlier as he was in Sabah while I was here in Bukit Jalil.

“I never thought that we could win the first gold for diving in this Sukma because we only trained for a few hours.”

Gabriel hoped Julfaddli would take over the mantle in the next Games in 2024.

“The difficulties in the routines are not high compared to those in the national team but this is a good start for Jufaddli,” he said.

Julfaddli said Gabriel was his inspiration.

“I’ve been following his style, like his approach to the edge of the diving board and the take-off,” said Julfaddli, who trains under former national divers James Sanyadud and Khairul Safwan in Kota Kinabalu.

“I’m happy as this is my first win in Sukma. I took part in Ipoh but I was still very young then and did not do well.”

Sarawak won the second gold at stake in diving in the men’s 10m platform synchro through newcomers Elvis-Jared Aiden Harold, who amassed 334.44 points. 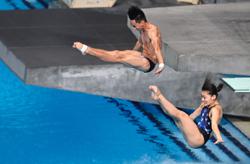