PETALING JAYA: Diver Mohd Syafiq Puteh (pic) is eyeing bigger glory at the Asian Games next year after making a splash at the Birmingham Commonwealth Games.

It was Malaysia’s first Commonwealth Games medal in the men’s competition since Ooi Tze Liang’s 3m springboard individual gold at the 2014 edition in Glasgow.

It was a splendid outing for the Perak-born Syafiq, who is the first Malaysian male diver to win two medals since Tze Liang’s gold and silver (10m platform individual) feat in Glasgow.

Syafiq will now shift his focus to the FINA Diving Grand Prix, which will be held in Kuala Lumpur from Nov 25-27.

He is planning to have a talk with coach Li Rui to decide on his targets for the Diving GP.

“We have a week’s break before the training for the Diving GP starts and I have been thinking about increasing the difficulty of my dives,” he said.

“Next year will be a packed year with the SEA Games and the Asian Games.

“The Asian Games will be important as I hope to achieve another first for my diving career.

“There is plenty of work needed for the competitions.

“For now, I am unsure about the targets in the competitions and it will depend on the coach’s planning,” said the 26-year-old.

Commenting on his achievements in Birmingham, Syafiq said he was satisfied.

“My performance was quite good in the Commonwealth Games. I won a silver with Gabriel, which was never a target. We were actually eyeing the mixed synchro 3m springboard gold medal.

“Dhabitah had been competing for three days back-to-back. Maybe she was fatigued by the time the mixed synchro event was held and we could not be consistent with our dives.

“However, it’s still a good outing for us and we gained a lot of experience in Birmingham.” 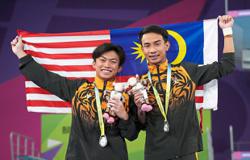