Dismal show: Pandelela Rinong failed to contribute a medal for the first time at the Games. — AFP

DIVER Pandelela Rinong has opened up about her fourth Commonwealth Games outing, describing it as a humbling experience but is determined to come back stronger than ever.

It’s the first time that the two-time Olympic medallist has failed to contribute a medal at the Games.

Having fallen short in both her pet 10m platform individual and 10m platform synchro events earlier, the 10m mixed synchro on Monday was her last chance to get a medal.

But the combination of Pandelela-Jellson Jabillin could only finish fourth at the Sandwell Aquatics Centre.

It is certainly a big blow for Pandelela who had arrived in Birmingham on a high after winning two bronzes (in platform individual and in platform synchro with Nur Dhabitah Sabri) at the World Aquatics Championships in Budapest just weeks earlier.

“Coming to Birmingham, I always gave my best in my preparation, for I know how important this event is for the country.

“But my body recovery process was slower than expected since returning from the Budapest world championships and it continues to bother me even after I’ve arrived.

“I admit that I struggled in my individual event on the first day. Because physically, I wasn’t 100%. I could not adapt fast enough with the local time zone.

“I recovered later and we did some great dives in our platform synchro event with Dhabitah and later with Jellson Jabillin in the mixed synchro. But others did better and luck was not on our side,” said the 29-year-old, who has contributed five medals, including two golds, in three previous appearances since 2010.

Pandelela also expressed her satisfaction with the performances of the younger divers despite the Malaysian diving team failing to meet the one-gold target.

“I am happy with our partnership, especially with Jellson, who has to compete despite an injury.

“I’m very proud of the team, especially the youngsters who did well this time.

“This is just the beginning. You have to experience both the ups and downs in order to move forward. I will return home to reflect and recuperate well.

“Thanks for always supporting me all the way, especially my coaches and teammates, who always cheer for me. You are my source of motivation to continue diving. I will return your kindness in my next competition.” 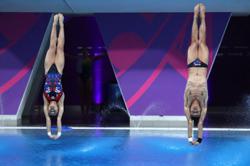