Jun Hoong hopes for a summer of change in Rio

PETALING JAYA: Malaysian diver Cheong Jun Hoong has gone through career-threatening injuries throughout her diving career, but her luck may be about to change in the Olympic Games in Rio de Janeiro.

Jun Hoong was left out of the World Championships in Kazan, Russia, in July last year at the last-minute after she injured both her heels while training in China.

That wasn’t the first time that she had missed out on a big event. She had to skip the 2006 Asian Games in Doha after sustaining a back injury that saw her undergo a long recovery process.

The heel injury she suffered while training in China last year proved to be the turning point as she realised that she needed to recover and come back stronger.

Jun Hoong returned to action in the Diving World Cup in Rio in February and earned quota slots for Malaysia in three Olympic events.

Her second Olympic appearance could very well turn out to be her finest moment.

National coach Yang Zhuliang seems to have faith in her abilities as he has entered her for all three events – 3m springboard individual and synchro and 10m platform synchro – in Rio.

Jun Hoong will dive into action with room-mate Nur Dhabitah Sabri in the women’s 3m springboard synchro on the opening day of diving competition on Sunday.

But it’s Aug 9 that every Malaysian will be waiting for with bated breath as she takes to the pool with Pandelela Rinong in the 10m platform synchro. Hopes are high that the pair will be able to win a medal in this event.

Jun Hoong will return to the pool three days later for the 3m springboard preliminary.

Many are expecting Jun Hoong and Pandelela to repeat their World Cup silver-medal show in Rio, but the Perak-born diver does not want to focus on just one event.

“All three are equally important. All I can say is that I’ll try to hit my personal best ... or better.

“If I can do that, I think I can get a good ranking. My partnership with both team-mates (Dhabitah and Pandelela) have been going well so far.

“Since there are no preliminaries, I believe that if we can string our five good attempts, we have a chance,” said the 26-year-old Jun Hoong, who finished fifth in the3m springboard individual at the World Cup.

Jun Hoong has been going through the paces with her team-mates for the last three days at the Maria Lenk Aquatics Centre in Rio de Janeiro.

“We will be competing at an outdoor venue, but it has a different feeling compared to when we were here for the World Cup (in February). It was winter then and it was raining during the 10m platform synchro competition,” she said. 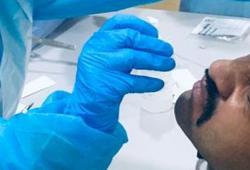