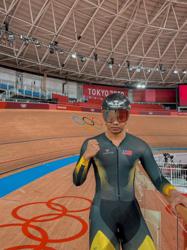 MOHD Fadhil Zonis (pic) offered no excuses for not contributing more to the national track cycling team at the Commonwealth Games in Birmingham.

Fadhil, who returned home yesterday, was hoping to give a good account of himself in his second Commonwealth Games appearance but came up short in all four events he took part in.

He was eliminated in the early rounds of the individual keirin and sprint but what was more painful was his performance in the 1km time trial where he started as the Asian Championships silver medallist.

Fadhil fell off his national record pace at the end of the three-lap time trial contest to only finish10th in 1:01.734 at the Lee Valley Velodrome.

However, he needed to break his national record mark of 1:00.305 to have any chance of making it to the podium for the first time.

Trinidad and Tobago’s Nicholas Paul took the bronze with 1:00.089.

Fadhil took over as the anchor for the team sprint trio when Malaysia were inside the top-four position and eventually settled for fifth.

Fadhil, who has been earmarked as a top talent for the future, admitted that it was not the performance he had expected from himself.

“It’s kind of disappointing for me. I’ve been training very hard for this Commonwealth Games but I couldn’t deliver the way I wanted,” said the 24-year-old.

“I blame myself for this poor performance. It’s hard to swallow but this is the truth.

“I have, however, learnt a lot from this tournament and I will come back stronger than before.

“Thank you to everyone who has supported me from the beginning until now. Also big congratulations to my teammate Mohd Shah Firdaus Sahrom. The (keirin) bronze feels like gold to him and to us as a team,” he said.

Shah Firdaus ended an eight-year drought for the Malaysian cycling team at the Commonwealth Games by taking bronze in the keirin.

It was the only medal for Malaysia in track cycling. The last time Malaysia won a cycling medal (bronze) was also in keirin, via Azizulhasni Awang back in 2014 in Glasgow.