Some contenders exposed, others implode on Tour's first mountain test

LOUDENVIELLE, France (Reuters) - Some contenders were exposed while others imploded in the first mountain test of the Tour de France as Briton Adam Yates hung on to the overall leader's yellow jersey on Saturday.

Stage eight winner Nans Peters had long crossed the line when fellow Frenchman Thibaut Pinot's ordeal ended after the Groupama-FDJ rider, highly fancied to become the first local winner of the race in 35 years, had been dropped in the second ascent of the 141-km trek through the Pyrenees.

The 30-year-old, who last year abandoned the race two days from the finish in Paris, was suffering from back pains after a crash in the opening stage and Saturday's effort was too much to handle as he finished almost 20 minutes behind his rivals.

Dutchman Tom Dumoulin, who was the 'Plan B' in pre-race favourite Primoz Roglic's Jumbo Visma team, could not sustain the pace in the last ascent to the Col de Peyresourde.

On that climb, a 9.7-km effort at an average gradient of 7.8%, Slovenian Tadej Pogacar, Roglic's compatriot, attacked repeatedly.

Roglic was in control, as well as Colombian Nairo Quintana, but defending champion Egan Bernal appeared to struggle and had to fight his way back to the favourites' group several times.

Roglic eventually let Pogacar, who was trailing him by 1:23 in the morning, ride away, but he never panicked and is still the best placed top contender ahead of Sunday's ninth stage, another trek in the Pyrenees.

"I'm taking it day-by-day, it's pretty hard to follow the leaders but I'm going to try to keep the jersey for as long as possible," said Yates.

"I rode my own pace, came back on my own pace (in the last climb) and managed to stay with them over the top."

The 21-year-old Pogacar, who held off the pack of main contenders in the final descent and regained 40 seconds to move up to ninth, will start Sunday's 153-km ride from Pau to Laruns, featuring the intimidating climb to the Col de Marie Blanque, with a target on his back.

It was his brutal accelerations in the Col de Peyresourde that ignited the race and left Colombian Bernal, Yates and France's Romain Bardet gasping for air, but Roglic's apparent reluctance to put the hammer down helped the trio pace themselves back into the main contenders' group.

Colombian Bernal, however, still had Ineos Grenadiers' team mate Richard Carapaz in support while Roglic was on his own.

Far up the road, Tour debutant Peters of AG2R-La Mondiale was building his victory, his second on a grand tour after a Giro d'Italia stage win last year.

Peters and Russian Ilnur Zakarin dropped the breakaway riders in the ascent of the Port de Bales, an 11.7-km climb at an average gradient of 7.7% that was fatal to Pinot's hopes.

"I saw he was riding awfully in the descent and I pressed on," said Peters, who sped away on the downhill section leading to the foot of the Col de Peyresourde and never looked back. 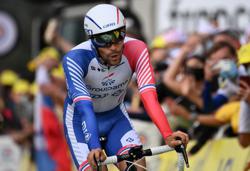