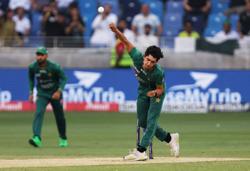 MULTAN, Pakistan (Reuters) -Pakistan's Abrar Ahmed made a stunning test debut by claiming seven for 114 to bowl out England for 281 on a frenetic opening day of the second test in Multan on Friday.

Pakistan were 107-2 in reply, with skipper Babar Azam leading their bid for a series-levelling victory with a fluent 61 not out.

Saud Shakeel was on 32 at the other end when bad light stopped play.

Pakistan are still 174 behind but will be happy with how they have bounced back from the defeat in the opening test in Rawalpindi.

"I will not forget this day," Abrar told Sky Sports via an interpreter. "I want to win this match for Pakistan and also do well in the coming matches."

"I bowled cross-seam to start to see what was required. Variations were the key on this pitch."

A bespectacled spinner mowing down the top half of England's explosive batting lineup in the first session of his debut test is hardly what visiting captain Ben Stokes would have expected after he won the toss and elected to bat.

Pakistan were already without pace spearhead Shaheen Afridi, ruled out of the series following an appendicitis surgery.

Pakistan opted for a spin-heavy attack while rejigging the squad, picking Mohammad Ali as their lone specialist seamer sharing the new ball with all-rounder Faheem Ashraf.

Their three replacements included Abrar and the leg-spinner impressed immediately after being introduced into the attack in the ninth over.

The 24-year-old tasted success with his fifth delivery which he spun through the gate to dismiss Zak Crawley (19).

Ben Duckett (63), one of the four Englishmen to smash a hundred in Rawalpindi, raced to a 40-ball 50 before falling leg- before in an eventful Abrar over.

It began with Duckett using review to overturn an lbw decision against him and ended with Pakistan taking the same route to reverse a not-out decision and remove the opener.

The Abrar-review combination also accounted for the wicket of Joe Root (eight) on a forgettable day for the on-field umpires who had to reverse several of their decisions.

Ollie Pope used one such review to prolong his innings and went on to smash a run-a-ball 60 before playing one reverse sweep too many.

Abrar got his fifth when Harry Brook offered a skier which Mohammad Nawaz took at mid-off.

The flurry of wickets notwithstanding, England did not abandon their aggressive batting philosophy and raced to 180-5 at lunch, which is the most scored by any team in the first session on day one of a test match.

When they returned after the break, Stokes (30) and Will Jacks (31) produced breezy cameos before both fell to Abrar.

Particularly impressive was the googly with which he bowled Stokes who was left open-mouthed by the dismissal.

Zahid Mahmood dismissed Ollie Robinson and Jack Leach in successive deliveries and finished with 3-63 as England lost all 10 wickets to spin bowling.

Duckett refused to call Abrar a 'mystery' spinner and said they would be better prepared to face him in the second innings.

"There was no real mystery to it but he bowled beautifully today," the opener said. "I'm sure we'll have our plans second innings but I'm pretty sure it won't be blocking it."

Pakistan lost Imam-ul-Haq early in their reply and the other opener, Abdullah Shafique, soon after crossing the 50-mark but Babar looked in his element hitting nine fours and a six. 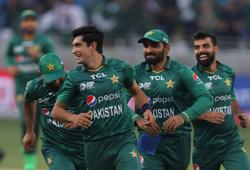 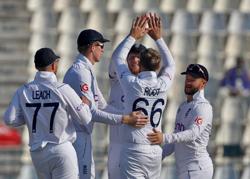